Madonna says Lady Gaga is obsessed with her and is not sure why. 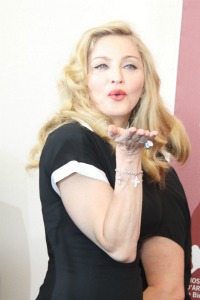 Ouch! Lady Gaga’s idol totally dissed the pop star in the press, saying Mother Monster is “obsessed” with her.

While promoting her film W.E. at the Venice Film Festival, Madonna told French newspaper Le Soir, “As for Lady Gaga, I have no comment to make about her obsessions having to do with me because I don’t know whether her behavior is rooted in something deep and meaningful, or superficial.”

Way harsh! Was there something lost in the clunky translation? Maybe. While Madonna’s rep didn’t have an immediate comment on that specific story, she did remind us that Madge has been supportive of Lady Gaga.

In fact, Gaga herself claimed that she received a very kind email from Madonna’s camp when there was chatter that Born This Way was a ripoff of Express Yourself — a claim Madonna’s rep said she knew nothing about.

Super weird. Maybe Lady Gaga is obsessed. “You know, there is really no one that is a more adoring and loving Madonna fan than me,” she said. “I am the hugest fan personally and professionally.”

What caused Madonna’s outburst? Is she still cranky about those hydrangeas? Smarting over her ex Guy Ritchie having a baby with a model half her age? Or is this just a case of lost in translation?

Madonna celebrates her 53rd irthday with her boy toy