Cosmo’s Oct. cover girl Minka Kelly talks her Derek Jeter breakup, fashion and Charlie’s Angels in the new issue, on stands Tuesday. Plus, SheKnows has some Kelly scoop on the ABC revamp! 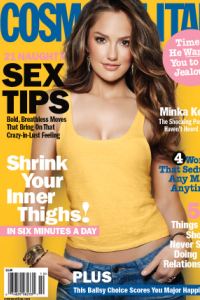 The 31-year-old went covergirl sexy-casual in jeans and a midriff-baring top — just like she did when she landed Esquire’s Sexiest Woman Alive cover last year.

Inside the mag, Kelly reveals the real reason things didn’t work out between her and 37-year-old Yankees shortstop Derek Jeter, the two surprising things that can win her over instantly and how her turbulent past helped launch her career. Fashionistas will also enjoy learning which beauty product Kelly can’t live without.

As for her new show, Kelly can’t wait to hit the air this fall.

“‘I’m excited by the idea of three women kicking ass and taking names,” she told the mag. 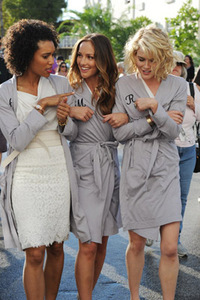 Cosmo is sure to have some fresh goods on Minka Kelly, but SheKnows also got to chat with Kelly this summer at the TCA.

While the show promises many bootylicous fight scenes, when SheKnows talked to Kelly at the TCA, she insisted the show is about more than that, which is why she can relate to her character.

“The thing about Eve is that she was an orphan and she was on her own her entire life and she had to fight and fend for herself and survive — I have a lot in common with her on that aspect,” Minka said. “I am an only child, and I was raised by a single mother, and we moved around a lot. I understand what that’s about, and I also understand what it is to create your own family.

“I’m really attracted to that aspect of the show, as far as making these girls and Bosley my family,” she continued. “I think there’s a lot of people in the world and a lot of girls and guys out there that have that in common with myself and Eve. It’s just one of the many things I find to be very relatable to people and why it will be enjoyable to watch. Along with the eye candy and it all being so beautiful to watch, there’s also a lot of depth and emotion.”

Strike out! Minka Kelly and Derek Jeter are over

On the set of The Roommate