Kate Hudson’s image is about to come under fire thanks to dad Bill Hudson’s upcoming tell-all book. Could the romantic comedy actress really be a “spoiled brat” as he asserts? 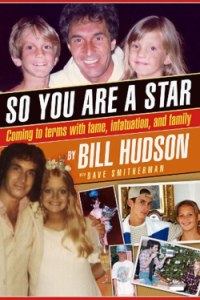 This fall Bill Hudson’s book is set to hit the shelves and the proverbial stuff is likely to simultaneously hit the fan. The 61-year-old father of Kate Hudson from his marriage to Goldie Hawn is letting the family drama fly the book that seemingly has two titles: So You are a Star: Coming to terms with fame, infatuation, and family — and/or 2 Versions: The Other Side of Fame and Family.

Either way the book’s website tells readers, “Life in the spotlight is not without its consequences, and the Hudson family was no exception. While enjoying success as a part of the 1970s musical group The Hudson Brothers, Bill Hudson fell in love and married actress Goldie Hawn.

“After their divorce, Bill found himself in the middle of the controversial issue of parental alienation. His rights as a father to see his children were often played out in the media because Oliver and Kate became actors themselves.”

Inside the pages Bill Hudson accuses Kate Hudson of neglecting her ailing grandmother. “Kate doesn’t have to talk to me and she doesn’t have to give her a dime of her millions. All I want is for her to call and say, ‘Hi grandma’, before it’s too late,” Radaronline quotes Bill as saying.

He continues, “I love Kate, but… She has done stuff which is just awful. She is a spoiled brat in my eyes and at the end of the day, she should meet her little sister. I should meet my grandchild and she should help her grandmother.”

Ouch! Will you be picking up a copy of Bill Hudson’s tell-all book about daughter Kate Hudson?