Taylor Lautner talks to Seventeen about his career goals and his connection with Abduction costar Lily Collins. 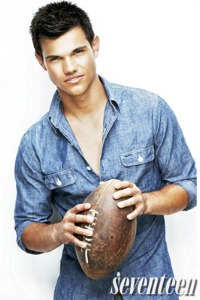 The foxiest werewolf around is not stopping once The Twilight Saga comes to an end. Taylor Lautner has set some lofty goals, and he’s not giving himself a whole lot of time to achieve them.

Lautner told Seventeen, “I believe in the saying, ‘If you aim at nothing, you’re going to hit nothing.’ So if you don’t set goals, then you have nowhere to go.”

“I guess winning an Oscar is the ultimate dream. A lot of amazing actors go their whole career without even being nominated.” (Tom Cruise, anyone?)

“So that would definitely be a goal to reach,” Lautner said. “It’s a difficult one, but I’m aiming for it!”

His first step towards that goal is in the upcoming movie Abduction — and, by the way, it seems there was some pretty heavy-duty chemistry with his costar Lily Collins.

“You can feel some sort of chemistry or a connection when you are reading a script with someone for the first time,” Lautner told the mag. “And that was totally the case with Lily.”

Check out Taylor Lautner in the October issue of Seventeen on newsstands Tuesday, September 13.