If you follow 50 Cent on Twitter (and why wouldn’t you?), then you’ve probably noticed all of his tweets hash-tagged as #SK. We wondered what this whole SK thing was all about — and now we know. 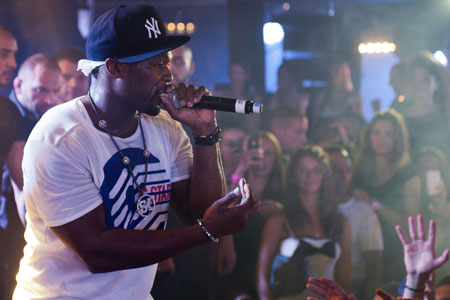 “I want to impact peoples lives more. I created a new goal for myself, I want to feed a billion people in africa over the next 5 years,” the rapper tweeted in July. He’s developed the goal over the past two months, partnering with Pure Growth Partners to launch the drinks.

“50 Cent and I share a common vision: To address the world’s problems through smart and sustainable business models,” said Chris Clark, Pure Growth Partners founder and CEO. “With the rampant starvation in Africa and hunger afflicting children worldwide, we need socially responsible businesses that affect real change now more than ever.”

The Street King energy drinks will go on sale this month and come in flavors Orange Mango and Grape. They’ll be a little steep in price: upwards of $3.00. It’s for a good cause though, so why not?

“I’m inspired by [Clarke’s] vision and innovative approaches to tackling serious issues. It’s our mission with Street King to really change children’s lives around the world,” the In Da Club rapper said in a statement.

50 Cent knows a thing or two about the beverage biz — he went into partnership with Glacéau to promote their VitaminWater line of beverages in 2007. He didn’t take an upfront payment, like most celebrities do. Instead, he took a stake in the sales, netting him millions.

We have a feeling he’ll use the same power to make millions for Africa with Street King.

Will you buy Street King to help raise money for Africa?