After lots of speculation, Ben Flajnik has been revealed as the next Bachelor!

Surprise! Ben Flajnik is getting a second chance at love — and it’s not with Jennifer Love Hewitt! 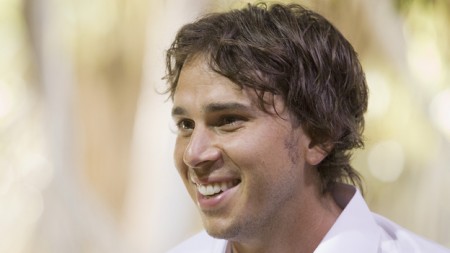 If you came across ABC’s website today, you might have noticed an interesting message that said, “Want to know who will be starring in the next edition of The Bachelor?”

If you clicked, you were greeted with the fantastic news that Ashley Hebert’s Bachelorette cast-off, Ben Flajnik, is the new Bachelor!

While it’s not a complete shock, it is nice to finally know it won’t be Ryan Park — that would have driven us off the deep end.

Ben Flajnik tweeted his own excitement on Tuesday as fans began clicking and reading the news: “Secret is out. Looking forward to my new journey as the new Bachelor!”

So, how is ABC marketing the man who was left on one knee by Ashley Hebert? As a catch of course!

The website officially describes Ben as, “A rare, modern Renaissance man, Ben dabbles in a lot of hobbies and crafts, such as crab fishing, sailing, golf, skate boarding, surfing, playing piano and singing in a tribute band. He is also quite handy with a hammer and saw, and loves fixing and building things, as well as landscaping. The woman who will share his life will also have to share one of his other great loves: his Jack Russell Terrier, Scotch.”

That’s a lot of man for the new batch of lucky ladies competing for his love. Hey, do you think “Love” will apply?

We have to ask, is Ben Flajnik what you were hoping for, or did you want Ryan Park or perhaps Ames Brown? Please don’t say smiley Ryan.

The next edition of The Bachelor will air in January. Will you be tuning in or have you had enough?