Joy Behar told her audience on The View why she and her longtime partner finally got married. 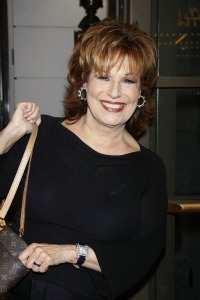 If you were with a love partner for 29 years, what would finally drive you to tie the knot? Friends were shocked when Joy Behar married Steve Janowitz earlier this summer, but the co-host of The View had ten hilarious reasons to explain the move.

10. Steve tired of holding his stomach in every time he gets undressed.

9. Joy doesn’t want her grandchild asking “is Nana a putana?”

7. They need a good excuse to go off their diets for a night.

6. Joy embarrassed asking about senior discounts for her “boyfriend.”

5. Steve tired of being referred to as “that old guy” by Joy’s relatives.

4. Joy promised to not play iPad scrabble in bed on their wedding night.

3. Sick of Barbara Walters bugging her.

2. A career move, Joy hoping to get on the cover of Brides Magazine AARP edition.

On a more serious note, Behar — who is not actually expecting any number of babies — said that the recent legalization of gay marriage in New York state had a lot to do with the couple’s decision to wed.

“It did have an influence on me – it brought to my consciousness why gays needed to get married,” she said of the rights legally married couples enjoy, like hospital visitation, inheritance and tax breaks. “And I thought it was a good reason for me to get married. And so did Steve, so we did it.”