Miley Cyrus says she is thankful to Joan Jett for never apologizing. 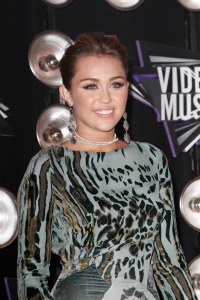 Joan Jett rocks hard — does Miley Cyrus do the same? That’s highly debatable, but that young star says she is grateful to Jett for showing her how to be herself.

In an interview for the Sept. Heroes issue of V Magazine, Cyrus told the I Love Rock n’ Roll singer, “People see me as this perfect Disney star, and the moment I put out a record that says ‘I’m not 11 years old anymore,’ people look down on me.”

“That’s why I have always looked up [to] you,” Cyrus said. “When you came out people were shocked that there was a chick that wanted to rock as hard as the guys.”

Joan Jett has nothing but sympathy for the price of fame that Miley has had to pay.

“I was thinking to myself… how difficult it must be to lead your life as a teenager with the paparazzi and the amount of press you’re surrounded by,” she told Cyrus. “I thought to myself, ‘Wow that was kind of a blessing that we didn’t have that stuff when I was growing up in The Runaways.'”

If you’re wondering what kind of connection Miley Cyrus and Joan Jett could possibly have, Cyrus has basically idolized Jett since she was born. She sang I Love Rock n’ Roll as her audition piece for Hannah Montana and used Jett’s image as the inspiration for the cover of Can’t Be Tamed. The two performed together on the last season of Oprah.