Audrina Patridge, former star of MTV’s The Hills, parties hard in a bikini with ex-boyfriend Corey Bohan in Las Vegas. 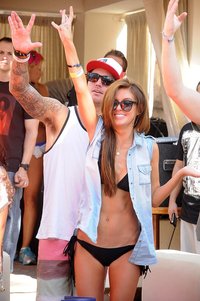 What’s Audrina Patridge’s next move after swearing off reality TV?

The former star of MTV’s The Hills and the recently concluded Audrina: The Series was seen partying it up Sunday at the pool at the Hard Rock Hotel & Casino in Las Vegas, wrapped up in bad boyfriend Corey Bohan’s tattooed arms. The pair were taking in a performance by rapper and sometimes Haitian presidential candidate Wyclef Jean.

Patridge was looking trim in a tiny black bikini and later she also wore a denim vest throw-over.

Audrina and Corey have been on-and off since 2008, for those paying attention. As for her reality TV career, it’s over for the time being, according to the star. 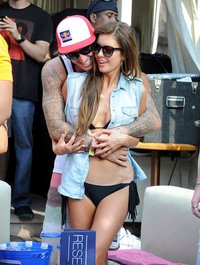 “I kind of decided I wanted to take some time off from reality. I want to do something more like acting or hosting,” Patridge said last week.

Patridge, her brother and Bohan had dinner together at the Hard Rock Hotel & Casino’s 35 Steaks + Martinis restaurant and then went dancing at the hotel’s Vanity Nightclub Saturday night, according to a hotel rep.