Eddie Murphy has confirmed that he will host the 84th Annual Academy Awards, which will air live on ABC on February 26th, 2012. 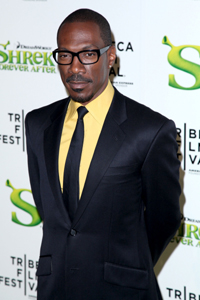 The rumors are true! Eddie Murphy confirmed today that he will be hosting the 2011 Oscars.

“I am enormously honored to join the great list of past Academy Award hosts from [Bob] Hope and [Johnny] Carson to [Billy] Crystal, [Steve] Martin and [Whoopi] Goldberg, among others,” Murphy said in a statement. “I’m looking forward to working with Brett [Ratner] and Don [Mischer] on creating a show that is enjoyable for both the fans at home and for the audience at the Kodak Theatre as we all come together to celebrate and recognize the great film contributions and collaborations from the past year.”

Last year the Academy had two hosts, Anne Hathaway and James Franco, who got mixed reviews for their part – with Hathaway garnishing mostly good reviews, while Franco was blasted for being a dud.

Murphy, 50, is a natural choice for the gig, as he worked with producer Brett Ratner, who is producing the Oscars this year with Don Mischer, on the movie Tower Heist, which will hit theaters this Nov.

“Eddie is a comedic genius, one of the greatest and most influential live performers ever,” says Ratner. “With his love of movies, history of crafting unforgettable characters and his iconic performances — especially on stage — I know he will bring excitement, spontaneity and tremendous heart to the show Don and I want to produce in February.”

Not to mention that historically, comedians such as Crystal and Martin seem to win over audiences when hosting awards shows. Murphy seems to be a family-friendly favorite, appearing in movies such as Shrek and Daddy Day Care, a far cry from his raunchy stand-up acts in the 1980s.

Tell us: Do you think Eddie Murphy is a good choice to host the Oscars?