Katie Couric has had quite a year. She just left CBS and headed over to ABC. Her first big coup? She’ll be interviewing the queen of the small screen Sarah Jessica Parker. Not bad for a debut, huh?

Katie Couric, former co-host of the Today Show on NBC and anchor of the CBS Evening News has headed over to debut her brand new talk show entitled Katie on ABC. She’s also co-hosted on The View (where her Today Show replacement Meredith Viera appeared every weekday morning). She officially joined ABC News last June as a way to keep herself out there while she works on her new show. 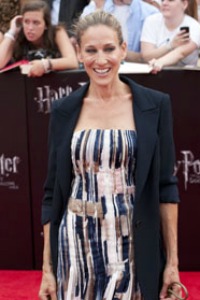 For her ABC News debut, she’ll be interviewing Sex In the City‘s Sarah Jessica Parker, the Hollywood Reporter tells us. They’ll be chatting about her brand new film I Don’t Know How She Does It, co-starring Greg Kinnear and Pierce Brosnan. They’ll reportedly also talk about career and motherhood. Parker, who is married to actor Matthew Broderick has a son James who is 8 and twin two-year-old daughters delivered by a surrogate.

Parker also reportedly talks about the “snarky” tone in the media these days. “I think the things that are more painful to me are not the intrusion of paparazzi, it’s the lack of civility that I find more intimidating and far more painful an experience,” Parker says. “It’s the lack of critical thinking. It’s the endless snarky, mean way we talk about each other, we approach each other. The anonymity of being cruel, the delight in tearing people down. The tabloid era that we find ourselves in is a cultural boneyard, and that is painful to me.”

Couric’s new show Katie will premiere on Sept. 8th on ABC. So, are you guys looking forward to the interview? Are you excited (or terrified) to hear her opinion on a Sex In the City prequel? And of course, let us know if you’re excited for Katie Couric’s new show. Give us your thoughts below.