It wouldn’t be the Miss Universe pageant without a little controversy – and this year it is courtesy of Miss Colombia Catalina Robayo, who forgot to wear panties while promoting the pageant. 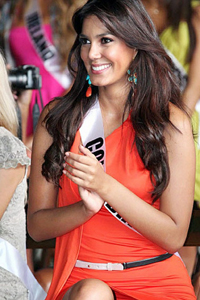 The 22-year-old is competing in the pageant, spearheaded by Donald Trump, and wore a tiny skirt, but forgot to bring along her panties. Wow, the things contestants will do to win points with the judges!

A local newspaper took photos of the event – and the crotch shot photo was reportedly on the front paper of the newspaper. Roboyo had on a short bright coral dress and was sitting down – and didn’t have her legs crossed like she should have. (Photo, right, has been cropped). Let’s just say Miss Universe officials were not pleased.

“Colombia had to be spoken to and told she needed to wear underpants as what she was doing was totally inappropriate,” a source told Fox News. “People have been pretty upset by it; there have been photos and media appearances where she has completely had her crotch out.”

President of the Miss Universe Organization, Paula Shugart, was reportedly “floored” when she heard what happened, Donald Trump has not commented, but he probably likes the publicity!

“There were several girls in short dresses which is was a little concerning, but when I saw the (commando) picture on the front page of one of the local papers and was very, very surprised,” Shugart said. “Our supervisors talked to all of the contestants about dressing appropriately, and one of our PR people spoke to her (Robayo) and apparently she said she was wearing underwear. But regardless, it created quite a stir here for a few days.”

Miss USA Alyssa Campanella (who we hope has not been going commando!) will be representing us in the Miss Universe pageant.