George Clooney is a wanted man in more ways than one! The talented actor and director overshadowed the Telluride Film Festival when he was honored with the Silver Medallion. 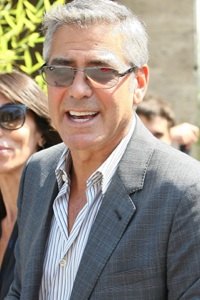 The 38th Annual Telluride Film Festival was the place to be this Labor Day weekend. It’s where George Clooney was given the prestigious Silver Medallion Award, making him Mr. Popularity among his peers.

The award is given to artists who’ve made significant contributions to the world of cinema. Clooney was touted alongside Tilda Swinton (We Need To Talk About Kevin) and French filmmaker Pierre Etaix.

Clooney’s festival opener The Descendants is directed by Alexander Payne and centers on a middle-age man, coping with his wife’s failing health and two rebellious daughters. The film has earned lots of praise and was an audience pleaser at the festival.

The Hollywood Reporter’s Todd McCarthy said that wherever Clooney appeared “a crowd of some 30 or 40 young ladies suddenly materialize out of nowhere to surround him.” He continued that it was “a sight unlike anything I had ever seen at Telluride before.” What can we say? The man’s a superstar!