ABC’s All My Children is pulling out all the stops before its Sept. 23 finale. Several of the show’s past stars are returning for one last hurrah including Hollywood icon Carol Burnett.

Carol Burnett is a TV legend who’s appeared on several shows (even Glee) during her long running career. But her stint on ABC’s All My Children holds a special place in her heart. 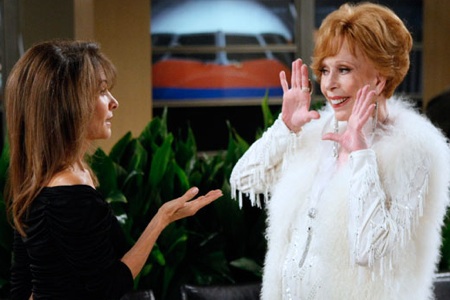 In 1983, AMC creator Agnes Nixon brought on Burnett to play the fiesty, one of a kind Verla Grubbs. Grubbs was the long lost daughter of Langley Wallingford and constantly bumped heads with his wife (her new step-mother) Phoebe Tyler-Wallingford.

Since Burnett’s AMC debut nearly 30 years ago, she’s reprised the role for special occasions such as the 25th anniversay in 1995 and the 35th anniversary in 2005. Therefore, no one should be surprised that she’d pop up before the soap’s final adieu.

According to Zap2it, Julie Hanan Carruthers, executive producer of All My Children welcomed the actress back to the show with open arms.

She said, “It is our honor and pleasure to welcome back Carol Burnett to Pine Valley. Verla Grubbs is a beloved member of the All My Children family and we look forward to reprising her character.”

Even though All My Children is going off the air this month, it will be resurrected on the internet thanks to a company called Prospect Park. The show is expected to debut a few months (possibly January) after its TV cancelation.