Regis Philbin has spoken — he will exit Live! with Regis and Kelly in Nov. 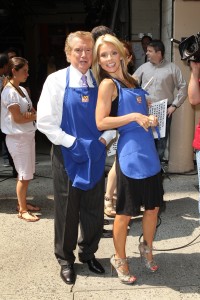 We can rest easy that Regis Philbin has not been pulling our chain this whole time — he’s revealed his talk show exit/retirement date.

Regis Philbin has announced that he will exit Live! with Regis and Kelly on Friday, Nov. 18.

If it seems like there’s not enough time to give the host a proper farewell — think again — there’s always time to pay tribute to Regis Philbin.

Regis Philbin announced his final air date in the appropriate setting — during Tuesday’s episode of Live! with Regis and Kelly.

While sitting alongside his trusty sidekick, Kelly Ripa, he confirmed Nov. 18 would be his last day with the show.

He said on Tuesday’s episode: “Last January I made the announcement that I’ll be moving on, but I never gave you an exact date. So I’m pushing it back five years! Just kidding!”

Always a kidder! Philbin continued to joke, “[Kelly] doesn’t want to hear that! She’s looking forward to some new, young, hot stud!… Don’t worry the show goes on. Of course Kelly will begin trying out new co-hosts just like 11 years ago when I did the same thing and found her.”

Kelly Ripa chimed in, “So get your resumes in!”

There has yet to be a replacement announced for the man who just turned 80, but some think there’s a dance-man on deck.

Rumors are swirling that Dancing with the Stars co-host Tom Bergeron is up for the role.

Wait, would that mean he’d be giving Ryan Seacrest a run for his money in the “host with the most jobs” category?

What do you think of Regis Philbin’s exit from Live! with Regis and Kelly? Do you think he had a few more years left in him or is this the perfect time for him to take a bow?