Madonna fans take note — her highness does not like hydrangeas! How dare you not know that. 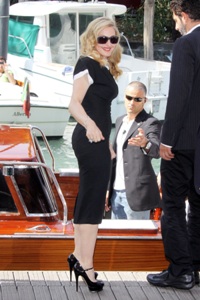 Madonna and hydrangeas do not mix. A floral gift, meant to be a token of appreciation for the material girl, is quickly turning into a viral video of Madonna gone snobby.

Watch the video of Madonna loathing hydrangeas for yourself below and tell us what you think. No big deal? Or have the superstar’s true colors been caught on tape?

During a lull in a press conference in Venice to promote her new film W.E Madonna was gifted a stem of purple hydrangeas. Though manners prevailed long enough for her to say, “Thank you,” to the gift presenter’s face, her microphone caught what Madonna truly thought about the flowers.

“I absolutely loathe hydrangeas,” Madonna can be clearly heard saying as she stuffs the gift under the press table. As if everyone ought to know of her disdain for the beautiful flower she adds, “He obviously doesn’t know that.”

Wowza. Looks like ‘gracious’ just got axed from the list of Madonna’s attributes! Shouldn’t this seasoned veteran of the entertainment world know there is no whispering in front of a microphone?

What do you think of Madonna’s hydrangea hate being caught on video?