We’re still salivating over the season three premiere of The Vampire Diaries and we can’t wait for this week’s all-new episode.

The Vampire Diaries premiered with the 18th birthday of Elena Gilbert, the quest to find Stefan (Paul Wesley) and the death of Damon’s (Ian Somerhalder) girl, Andie Starr. 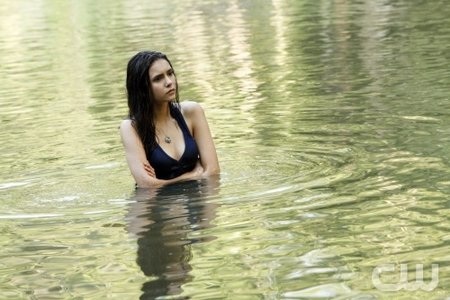 This week, the quest to find Klaus (Joseph Morgan) and Stefan heats up as does Jeremy’s search for the truth.

Check out a preview of The Hybrid…

The CW officially describes The Hybrid as the following: “Klaus (Joseph Morgan) puts a plan in motion that will give him even more power, but even with the unwilling participation of werewolf Ray Sutton (guest star David Gallagher), things don’t go exactly as Klaus had planned. Damon (Ian Somerhalder) and Alaric (Matt Davis) reluctantly go along with Elena’s (Nina Dobrev) new strategy to find Stefan (Paul Wesley), leading Damon into a dangerous fight with an unexpected enemy. Jeremy (Steven R. McQueen) turns to Matt (Zach Roerig) for help as he continues to try to understand what the ghosts from his past want from him. Unaware that Caroline (Candice Accola) is in need of his help, Tyler (Michael Trevino) faces an emotional confrontation with his mother (guest star Susan Walters).”

Stay tuned to SheKnows for recaps, previews and news on all your favorite CW shows.

What do you make of season three of The Vampire Diaries so far?

read on for more TVD news