Last week marked the return of Sarah Michelle Gellar in the CW premiere of Ringer. Will this week’s episode keep us interested? See for yourself with an exclusive CW preview. 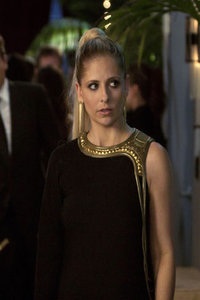 Are you a Ringerfan yet? We are!

As the twin sisters met for the first time in six years, it was revealed Bridget was the witness to a crime and now she’s on the run.

The CW officially describes the second episode, She’s Ruining Everything, as the following: “Bridget (Sarah Michelle Gellar) struggles to figure out a way to cover up a crime she has just committed, while still convincing everyone she’s Siobhan Martin. Her old life begins to catch up with her, as FBI Agent Machado (Nestor Carbonell) decides to stay in New York and learn more about Siobhan’s life and inner circle. As Bridget falls further into a web of lies, she confides her secrets to Malcolm (Mike Colter), which risks putting him in danger. Andrew (Ioan Gruffudd) and his business partner Olivia (guest star Jamie Murray, Dexter) throw a party to obtain new clients, which puts a wrench in Bridget’s plans, while Gemma (Tara Summers) and Henry’s (Kristoffer Polaha) fighting escalates as Gemma continues to find signs he is having an affair.“

Check out what’s going down this week in the all-new episode, She’s Ruining Everything…

Stay tuned to SheKnows for all the latest recaps, previews and news on your favorite CW shows.

What do you think of Ringer so far?