The Vampire Diaries’ creator, Kevin Williamson, is taking over Thursday nights with the premiere of The Secret Circle. It’s premiering tonight, so you don’t want to miss a preview of the pilot episode.

Supernatural Thursdays are about to heat up on the CW! 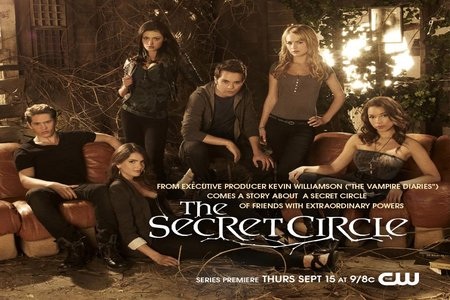 The CW is bringing us vampire hunks and secret witches starting tonight. Immediately following the season premiere of The Vampire Diaries, the network’s new show from the creator of TVD, The Secret Circle, is premiering.

The pilot episode is described by the CW as the following: “Cassie Blake’s (Britt Robertson, Life Unexpected) world is turned upside down after her mother dies in a mysterious accident, forcing Cassie to move in with her loving grandmother Jane (Ashley Crow, Heroes) in the small town of Chance Harbor, Washington. While trying to adjust to her new life, Cassie is quickly befriended by Diana Meade (Shelley Hennig, Days of Our Lives), a sweet-natured classmate who offers to show her around and introduces her to mean-girl Faye (Phoebe Tonkin, H2O: Just Add Water), her sidekick Melissa (Jessica Parker Kennedy, 50/50, Smallville) and Cassie’s next door neighbor Nick (Louis Hunter, Out of the Blue). Things get complicated when she meets Adam (Thomas Dekker, Terminator: The Sarah Connor Chronicles), Diana’s boyfriend, with whom she feels an instant and powerful connection.

Upon meeting one of her mother’s childhood friends, Dawn Chamberlain (Natasha Henstridge, Species), the school principal and Faye’s mother, Cassie begins to wonder why her mother never spoke of her hometown. When strange and dangerous things begin to happen, Cassie’s new friends are forced to tell her their secret – they are all witches and her arrival will complete the Circle. However, the Circle has not been drawn together again by chance – Diana’s father, Charles Meade (Gale Harold, Queer as Folk, Desperate Housewives) has plans of his own for the group.”

You don’t want to miss the series premiere of The Secret Circle.

Stay tuned to SheKnows for all the latest recaps, previews and news on your favorite CW shows.

Will you be tuning in for the series premiere of The Secret Circle?