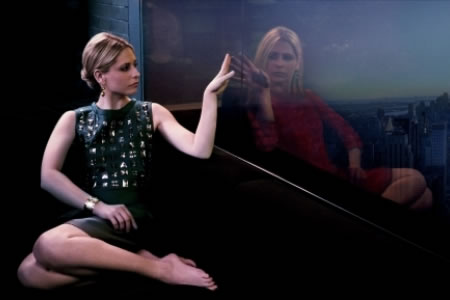 Fans have been waiting for Sarah Michelle Gellar’s Ringer debut and it’s here! Tonight, the former Buffy star will kick butt once again as twin sisters Bridget and Siobhan on the new series from the CW, Ringer.

The CW describes tonight’s pilot episode of Ringer as the following: “Bridget Kelly (Sarah Michelle Gellar, Buffy The Vampire Slayer) is six-months sober and starting to turn her life around when she is the sole witness in a murder trial. Despite the assurances of her FBI protector, Agent Victor Machado (Nestor Carbonell, Lost), Bridget knows her life is on the line. She flees to New York, telling no one, and reunites with her estranged twin, Siobhan Martin (Sarah Michelle Gellar). Wealthy, pampered and married to the strikingly handsome Andrew Martin (Ioan Gruffudd, Fantastic Four), Siobhan lives what appears to be a fairy tale life – a life where no one knows that Bridget exists. The sisters seem to be mending their frayed relationship – until Siobhan disappears mysteriously, and Bridget makes the split decision to take on her sister’s identity. She discovers shocking secrets, not only about her sister and her marriage, but also about Siobhan’s best friend, Gemma Butler (Tara Summers, Boston Legal) and Gemma’s husband, Henry (Kristoffer Polaha, Life Unexpected).”

Will you be tuning in for the CW premiere of Ringer?