Cheyenne Jackson put a ring on his beau’s finger in a beautiful beach ceremony! 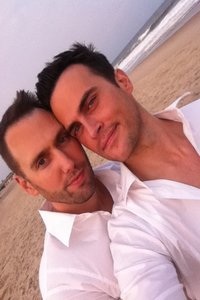 What did Glee’s Cheyenne Jackson do over the holiday weekend? Well, it involves the words “I do.” Can you guess?

You know him from Glee and 30 Rock and now he’s a married man.

The star tweeted a photo along with the message, “It’s official, after 11 years together, Zora’s no longer a bastard. Married the best man I’ve ever known.” Confused? Zora’s their dog!

So, where does a snazzy guy like Cheyenne Jackson marry the love of his life? He hit up the Hamptons on Saturday to exchange vows and make an honest man of his guy.

The best part? It went down just like he pictured it would.

“[We want] something small … just close friends and good music,” he once told NBC New York. “Our dog would be there. Our dog, our daughter, Zora. … Pretty boring, but something just nice and on the beach.”

We’re not going to lie, a beach wedding sounds fabulous, not boring.

Congratulations go out to the happy couple on this momentous occasion! We wish you all the happiness in the world.

What do you think of a wedding in the Hamptons? Boring or exciting?