Marc Anthony says there is no truth to the rumors that he cheated on Jennifer Lopez with Jada Pinkett Smith.

Marc Anthony has opened up for the first time about his marriage with Jennifer Lopez — and all of those rumors of infidelity that just won’t go away. 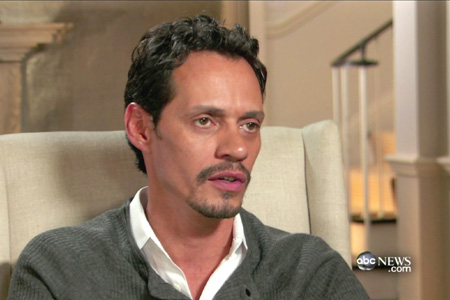 There have been reports that Anthony had an affair with his HawthoRNe co-star, Jada Pinkett Smith, who is married to Will Smith. When asked by Nightline about this rumor, Anthony said it was false.

“No, absolutely not.” And the Smith rumor specifically? “When something like that happens, it’s laughable,” Anthony said. “We’ve been friends for years. Jada, Jennifer, me, [Will Smith], for years.”

So what did happen? “People are trying to peg it on things because it was so shocking,” he says of the end of his seven-year marriage. “It was like, it must have been something. It was a realization on both our parts. So you know it wasn’t shocking. These things happen. It was a decision that we made jointly.”

In fact, Anthony and Lopez are still planning on working on their reality show, Q’Viva! together.

“This is not a funeral. This is not a burial. This is just two people who came together and just realized – and so I’m saying that it wasn’t sustainable the way it was, and that’s that.”