Eva Longoria and her boyfriend Eduardo Cruz were spotted by SheKnows at LAX today. 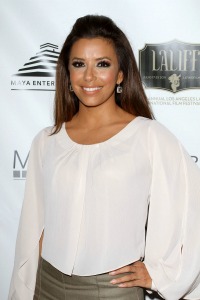 SheKnows had a brush with fame today when this writer spotted Eva Longoria at the Los Angeles International Airport. Standing just two people ahead of me in line at the TSA with her boyfriend Eduardo Cruz, here are some observations I made of the Desperate Housewives actress.

Eva Longoria is the exact same height as a troll doll.

The couple was carrying on three pieces of hard-sided Louis Vuitton luggage, probably filled with all sorts of fancy underwear that costs more than your monthly grocery bill.

This obviously means she has some kind of funky foot fungus now from walking through security without protection.

Valentino is lending her the gown for whatever event she’s on her way to, judging from the garment bag.

Her boyfriend, who was traveling with her, looks nothing like his gorgeous sister Penelope Cruz.

She did not have to take her sunglasses off when going through the scanner like the rest of us. Of course, she also didn’t pitch a fit about having the scanner take naked images of her like I usually do, so that’s a plus.

Times like this make a girl wish she had sprung a membership to the airline concierge club so I could do more stalking!