Whole Foods supermarket decided to pull Bethenny Frankel’s Skinnygirl cocktails off their shelves because it is not as “natural” as it claims. Bethenny’s response? “I haven’t lost even a wink of sleep.” 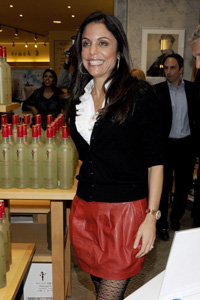 Bethenny Frankel’s Skinnygirl Margarita claims on the label that it uses “all natural ingredients” and has “no preservatives,” however Whole Foods says that it actually contains the preservative sodium benzoate.

In a statement, Whole Foods says that Skinnygirl “had been offered in 16 of Whole Foods Market’s 310 stores. After discovering that it contains a preservative that does not meet our quality standards, we have had to stop selling it.”

Bethenny’s response? So what? Who cares? “Skinnygirl cocktails were created to solve a problem: to create a line of guilt free cocktails allowing women to drink the indulgent drinks they actually want to drink with as few ingredients as possible,” she says. “I’m not making wheatgrass here. If I could put an agave plant and some limes on a shelf I would. [The Skinnygirl Margarita] is as close to nature as possible, while still being a shelf stable product.”

Beam, the company that purchased Skinnygirl cocktails from Bethenny for around $100 million agrees, saying that it contains “very low levels of sodium benzoate” and that the preservative is “very common.”

Bethenny goes on to say that Whole Foods doesn’t really make a different to her bottom line of sales.

“With all due respect to Whole Foods, we were in a dozen of their stores and have decided not to continue in these stores. They represent an infinitesimal fraction of our business. We are, in fact, the fastest growing spirits brand in the US,” says Bethenny, who is working on a Skinnygirl book. “We were bound to piss someone off and everyone loves to try to tear down a success. This is a non-event. I haven’t lost even a wink of sleep.”