Audrina Patridge passes on some dancing words of wisdom to her friend and former The Hills alum, Kristin Cavallari, who will be competing on the upcoming season of Dancing with the Stars. 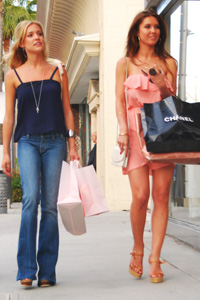 Fresh off her announcement that she will no longer be doing her reality show, Audrina Patridge revealed that she has been talking to Kristin Cavallari about her upcoming gig on Dancing with the Stars.

“I actually talked to [Kristin] last week,” Patridge said. “She texted me, and she was like, ‘Hey, I was just thinking of you, and I wanted to tell you I’m doing Dancing with the Stars. It’s going to be fun, right?’ ” And I was like, ‘Yeah, you’re going to have an amazing time! You’ll be in the best shape of your life.’ “

Cavallari will be dancing with pro Mark Ballas on the premiere of DWTS on Sept. 19th. Patridge competed on season 11 of the show and wowed the judges and fans before she was voted off after making it into the top five.

Hopefully Cavallari, who just broke off her engagement with Jay Cutler is ready to work! “Ballroom dancing, it’s totally different than just going to a club and dancing, so it takes a lot of commitment and dedication,” Patridge says. “You really have to live in the dancers’ world.”

So, how does Patridge think her frenemy Kristin Cavallari will do on DWTS? “I don’t know. I think she’ll do well, though.”

Tell us: How do you think Kristin Cavallari will do on Dancing with the Stars?