It was the proposal that shocked music and reality fans nationwide. Confirmed bachelor Gene Simmons put a ring on it with longtime love of 27 years, Shannon Tweed. But the question at that time was, would she say yes after so many years of missed starts?

Well, the answer was revealed today when the couple’s invitation was leaked to the internet. Longtime couple Gene Simmons and Shannon Tweed will be marrying on Oct. 1st, after a rocky year when it seemed there would be no recovering from the cracks in their relationship. 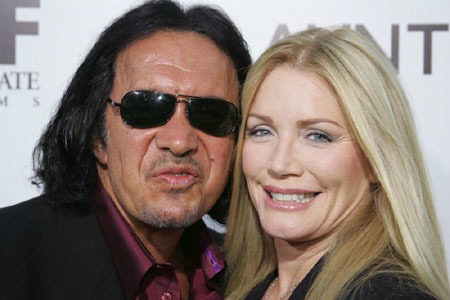 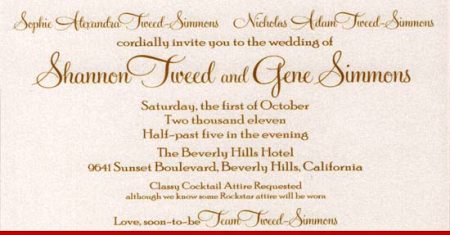 Read the full story of the invitation reveal here>>

After 27 years and two children together, it seems that Gene Simmons is ready to make an honest woman of Shannon Tweed, after a shocking finale proposal on the last Gene Simmons Family Jewels. But it wasn’t always smooth sailing for the rockstar couple. The twosome’s frequent separations due to KISS’ constant touring and Gene’s workaholic ways had put a strain on their relationship for many years. But Shannon insisted they were in love and indeed, they seemed like a united front.

We learned later that much of that was a facade, according to Shannon, for the sake of their children, Sophie and Nick, whom Shannon shielded from their father’s many infidelities. With her guidance, the two were allowed to live a normal and happy childhood.

Gene is reportedly worth over $250M. Although he is a notorious womanizer, Gene was committed to both Cher and Diana Ross ( living with each at one point) for a brief period of time before meeting Shannon. Gene’s claim to fame, other than his enormous tongue, was the legend that he slept with over 4600 women during his 37-year-run with KISS. He will neither confirm nor deny that he has been unfaithful to Shannon during thier relationship, other than acknowledging to his therapist on an episode of the duo’s reality show, Gene Simmons Family Jewels, that he has hurt her by putting his career and himself before their relationship.

Shannon was a Playboy Playmate who was said to have had a relationship with Hugh Hefner, which coincided with her being named Playmate of the Year in 1982. She also dated CFL linebacker Ron Foxx, but has since been known to be committed to Simmons during the run of their relationship.

During an interview with Howard Stern in 2006, the radio host asked Gene if he would ever agree to marry Shannon if she really wanted it. Gene replied he never thought that would happen because he “didn’t think she defined herself by her man.” Shannon, even at that time, showed a keen interest in being married.