Can’t get enough of Bethenny Frankel’s Skinnygirl cocktails and wines? Have no fear, there’s a Skinnygirl book on the way! 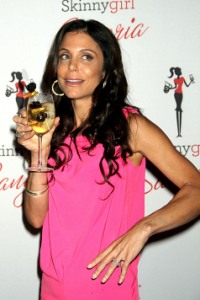 Bethenny Frankel’s Skinnygirl product line is expanding into the literary world. Pour a glass and get ready to read the steamy novel Skinny Dipping.

Bethenny Frankel’s first Skinnygirl novel is due out next spring and is just the beginnings of a three part book deal. (What’s next — Skinny Jeans?)

“It’s about a girl’s journey and what she wants, and trying to have it all. It’s about the lessons and the people along the way, about naysayers and rising above,” says the diet booze mogul of Skinny Dipping.

The former Real Housewives of New York reality star, pictured here launching the Skinnygirl Sangria line in early Aug., adds, “There will be a lot of juiciness and people wondering what it’s based on and if any of it was influenced by my life.”

As for life at home with 16-month-old daughter Brynn she says, “I have a part-time nanny there at 8 a.m., and I usually have her leave at 2. I like to be with the baby. I have an easy baby — and it’s exhausting. She jumped into the dishwasher today. She’s really structured, and she’s still a terror.”

Best of luck on the not not trying — and the upcoming publication of Skinny Dipping to Bethenny Frankel!

Will you be reading Bethenny Frankel’s Skinnygirl book debut?