Mega-kids channel Nickelodeon is joining forces with none other than First Lady Michelle Obama to give a push to their eighth annual worldwide day of play. Occurring on Saturday, Sept. 24, Mrs. Obama will join forces with the network to get kids outside and away from their televisions and computers. 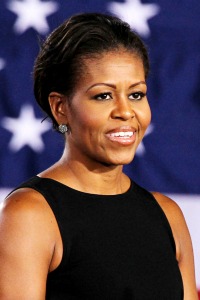 The First Lady of the United States, Michelle Obama, is teaming up with Nickelodeon and the President’s Council on Fitness, Sports and Nutrition in its biggest celebration of play ever, live from Washington D.C. on Sept. 24.

Mrs. Obama, head of the “Let’s Move” initiative, which encourages introducing children to healthier food and living a healthy life, is working hand-in-hand with kids cable channel Nickelodeon for the first time to bring the channel’s Worldwide Day of Play to the Ellipse in Washington D.C..

Nickelodeon and its partner channels TeenNick, Nicktoons and Nick Jr., will go dark for three hours on Sept. 24, in order for kids to get out of their homes and enjoy some fresh air. In our nation’s capital, the channel will host an entire day of activities and games for kids and their families to encourage active and healthy lifestyles.

Said Mrs. Obama, “Kids need to get moving every day to grow up healthy and strong. Whether it’s hoola hooping, kicking around a soccer ball or – yes- double dutching, playing is a perfect way to keep active, stay healthy and have fun.”

For several weeks prior to the start of the event, Mrs. Obama will appear on the channel in a series of spots that will remark on the event and to encourage children to try for the Presidential Active Lifestyle Award.

Children in every part of the U.S. are encouraged to be a part of the worldwide day of play at the more than 3,000 events scheduled nationwide.

This is the eighth year for the Day of Play. Launched in 2002, the day is an integral part of Nick’s The Big Help health and wellness efforts. To date, millions of children have participated in the WWDOP and other events that promote healthier lifestyles.

Said Marva Smalls, Executive Vice President, Public Affairs for Nick, “We share the same passion for that message, and at Nick we hope to continue to inspire action through Worldwide Day of Play and The Big Help.