Audrina Patridge is done with reality TV. The former MTV darling is looking for a new job that has nothing to do with Lauren Conrad, Spencer, Heidi or even Justin Bobby. 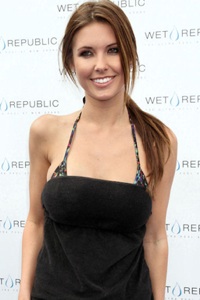 In 2006, Audrina Patridge made her small screen debut on the reality series The Hills. The show that centered on pretty people, with petty problems shot the unknown model to superstardom. She used the exposure to get endorsements, magazine covers and more reality gigs, but now she’s ready for a break.

Earlier this year, Patridge starred in her own self-titled reality show that followed her and her dysfunctional family. Unfortunately, it tanked in the ratings and didn’t turn her into a household name (i.e. Snookie). Therefore, we’re not surprised that Patridge spoke with The Daily and revealed that Audrina: The Series is done.

“We finished in April and I kind of decided I wanted to take some time off from reality. I want to do something more like acting or hosting,” she said.

Prior to joining The Hills, Patridge was a novice model and actress, so it sounds like she’s going back to her roots. Former co-star Kristin Cavallari tried her hand at hosting in 2006 with a show called Get This Party Started but it was cancelled after only two episodes. Perhaps Ms. Patridge can do better?