Lenny Kravitz is crediting his daughter Zoe with helping him get sober. During a dark time in the singer/actor’s life her presence inspired him to change his substance abuse habits. 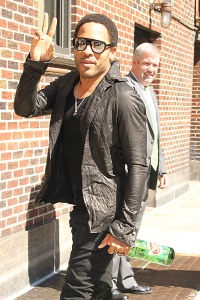 Lenny Kravitz is clean and sober today in part thanks to his daughter. When actress Zoe Kravitz was just 11-years-old she moved into her father’s home, unaware her mere presence was the best thing that could have happened to him.

“I had to surround myself with energy and chaos and excitement and conflict,” Lenny Kravitz tells Men’s Journal of his drug and alcohol abusing past. “For a bit I was high all the time, just medicating… I suppose that was so I didn’t have to feel certain things.”

The singer and actor, who will soon be seen playing stylist Cinna in the highly anticipated The Hunger Games series, was forced to sober up when his young daughter came to live with him 11 years ago.

“It was the best thing that happened. I had to change my life,” says the 47-year-old. “I was in the middle of my craziness. I had to focus, and I wanted to focus, but all of a sudden, here it was. I began to slowly change my life. If that hadn’t happened, I don’t know where I’d be now.”

Lenny Kravitz’s latest album Black and White America was released on Tuesday. Of his work over a year and a half living in near isolation in the Bahamas he says, “All my albums are positive, but there’s usually at least one song with a sadness or deep darkness. But this one is completely happy. My life has never been better.”

Congratulations on both the sobriety and new album release to Lenny Kravitz!