Last week began the episode that everyone had been waiting for, and this week it starts with a bang — or rather a bang to the head. Mike and Ronnie go all out within the first ten minutes of episode five and the results are so unexpected, the housemates are at a loss at what to do. 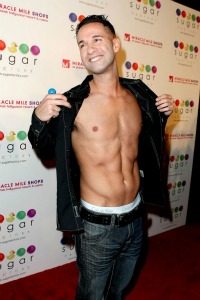 At the end of last week’s Jersey Shore in Italy, we left the housemates witnessing a screaming match between Mike and Ronnie. Ronnie, who clearly had too much to drink, accused Mike of starting yet another fight between him and girlfriend Sammi. As usual, Mike denied all allegations.

Mike screamed at Ronnie, saying he was sick of all the drama and being accused of doing things he says he doesn’t do. Mike was so upset he threw his bed and bashed his head into the nearest (cement) wall, falling to the ground.

Drunk and enraged Ron began screaming at Sammi and in the midst of that, Mike jumped up from the ground and ran after Ronnie. The two began such an intense fight it took two production guys from MTV to break them up. Jenni called an ambulance, which came to the house post haste. Pauly went in the ambulance with Mike, whose head was stabalized between two blocks.

Pauly said, “Big muscles doesn’t mean you can fight. You need to know how to punch and neither of them knows how to punch. Like Ronnie punched Mike and didn’t do anything. Mike knocked himself out. I think Mike tried to commit suicide by hitting his head against the wall because he was sick of dealing with the Ron and Sam bull****.”

Ron came down from his rage and apologized to everyone in the house. He tried to talk to Sammi but she wouldn’t have it anymore. She walked away from him saying, “I just won’t want anything to do with you ever again in my entire life.” A devastated Ron decided it was time to leave Italy, Sammi and the whole television life behind. In the end, he decided to stick it out.

Pauly nailed everyone’s feelings on the head when he said, “What comes to mind when I think about Ronnie and Sam is me throwing up because I can’t stand it anymore.”

Meanwhile, Mike was having a pity party by himself. He was hurt and alienated because no one checked in to see how he was doing since his accident. He was in a neck brace and sunglasses (indoors of course) and he cried in his bed while everyone else was out of the house doing their usual GTL.

In the end, Mike and Ron sorted things out. Mike told Ron that he smashed his head into the wall because he once got into a fight with a guy twice Ronnie’s size, and he smashed his head into a wall and the guy backed off because he thought he was crazy. Mike should have thought twice about doing that in Italy because many of the villas there are made with cement walls.

Pauly finally got some drama after a guy wanted to fight with him in a club for dancing with his girlfriend. Pauly didn’t know why the guy was angry with him, because he was yelling at him in Italian and Pauly didn’ t understand a word he was saying. Pauly thought twice about starting with the stranger and backed off.

Whew, and how was your week?