Remember the Glee season three dodgeball promo we brought you? Well, we have the new and improved version! Keep reading to check it out!

A dodgeball to Finn’s (Cory Monteith) face was epic! But there’s so much more to the new season three Glee promo we didn’t get to see in the original! 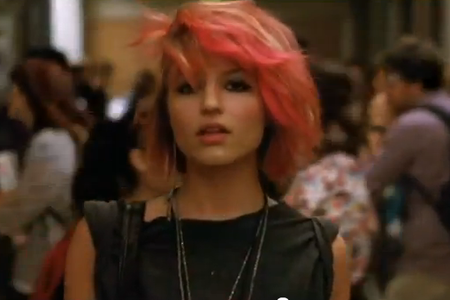 In the new season three promo for Glee, there are still dodgeballs, Sue Sylvester (Jane Lynch) and New Directions. What you’ll find this time around, however, is pink hair and blue slushies!

While you’re watching the kids of McKinley High ducking Sue’s sweet dodgeball aim, watch out for Quinn’s (Dianna Agron) new ‘do, a slushie to Finn’s face and some smooching!

Season three of Glee will be all about the characters — just ask Jane Lynch! “We had a great season last year, but we did kind of go all over the place with guest stars,” Lynch revealed during a conference call to reporters about her Emmy hosting gig.

She added, “[We] had a lot of fun with that. [This season] we’re kind of honing in on the stories of these kids, especially in light of the fact that several of them will be graduating at the end of bitter sweet season as the cast comes back as graduating seniors.”

That brings us to the all important question: Are you ready to watch as Finn and Rachel (Lea Michele) navigate their last year at McKinley High? What about Brittany (Heather Morris) and Santana?

The duo won a seven-episode arc for winning the Oxygen show and from the looks of it, Damian could be a real leading man.

What do you think of the new and improved Glee season three promo?