Is bald the new goatee? Contagion star Matt Damon, who plays a concerned father in the new action thriller about an infectious disease that sweeps the world, says his new shaven look is “inspired.” And, it keeps him tough. The 40-year-old actor knows how to fight for what he believes in – especially when it comes to his kids. The proud father of three sat down with SheKnows to talk about playing action heroes, shaving his head and responding when his wife’s calls him “Red Alert!”

On being an action hero

SheKnows: You typically play either an action hero or a family man. Which one comes more naturally? 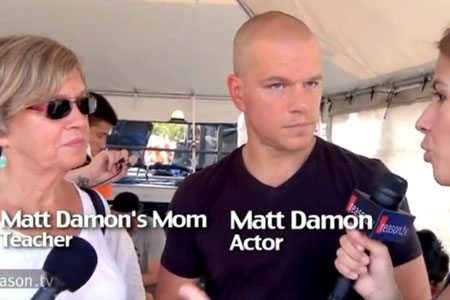 Matt Damon: Obviously, the action guys come way more naturally. [Laughs] Uh, yeah, if the director is good and the script is good, it all comes pretty naturally. And if those things aren’t in place, it’s impossible no matter what the role is.

SheKnows: Are you the guy who’s typically over protective?

Matt Damon: I’m probably more protective than I’ve ever been, now that I have children. I mean my wife’s nickname for me is “Red Alert.” [Laughs]. But, I think I’ve got a tendency to be a little over protective without trying to be a helicopter parent. 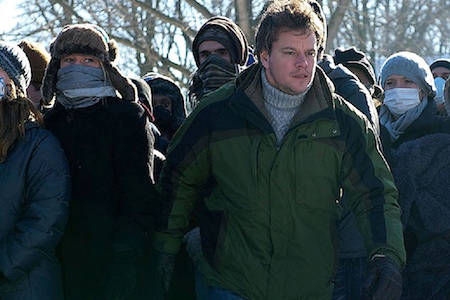 On being prepared… for anything

SheKnows: Give us the skinny on what’s in your basement? …A stockpile of supplies in case something happens?

Matt Damon: No. Well… [Laughs.] After the Northridge quake, I did… I had a flashlight by my bed for like two weeks. Then, I forgot about it. [Laughs.]

On his new head stubble

SheKnows: Tell us about your new look.

Matt Damon: Inspiration can strike at any time. [Damon points to either side of him. He’s sitting between Contagion director Steven Soderbergh and screenwriter Scott Burns, both bald.]

SheKnows: Did everyone working on Contagion shave their head? Germ factor?

Matt Damon: I’m doing a movie for Neill Blomkamp, who directed District 9, and this is what the guy looks like, the character. [Laughs.]

SheKnows: Is this your first time, flying free with no hair…?

Matt Damon: Ah… I did shave my head once when I did The Brothers Grimm. I had a wig, and so, just because it was easier to get the wig on, instead of lacquering my hair down, I shaved. So, I walked around in my regular life like this. And I loved it.

SheKnows: Is it for keeps?

Matt Damon: I see why these guys [referencing Soderbergh and Burns] rock the look. It’s great in the summertime, real easy getting out of the shower.

read on for more about Contagion