Oscar De La Hoya is coming clean about all his past indiscretions. 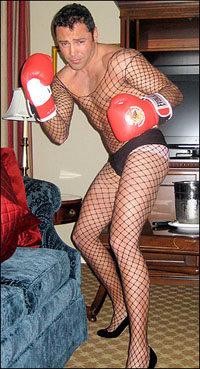 Sobriety is making an honest man of Oscar De La Hoya. First, the champion boxer admitted he thought about suicide before going to rehab. Then, he came clean about cheating on his wife.

“We are obviously not talking a Tiger Woods here, but I was unfaithful,” De La Hoya told Univision.

Now? De La Hoya says those photos of him in drag are actually him and not a “bad photoshop job,” like he claimed at the time.

“Let me tell you, yes, yes, it was me [in those pictures],” he said on news show Here and Now.

The photos featured the Golden Boy in a wig, fishnet stocking and heels while carrying on with Siberian model Milana Dravnel. He tried to keep Dravnel quiet, but she ended up suing him for lying. He settled with her for a reported $20 million.

Why did he pose for the pictures? Of course, he was high. De La Hoya even claimed he thought about suicide back then.

“One of these nights when I was drunk and alone again, I asked myself, ‘Is it worth it to be alive?’ I was already feeling like I had nothing,” he revealed. “And what is going through your mind are your children, your wife, the people who love you.”

Another reminder of why drugs are bad, kids.

Are you happy Oscar De La Hoya is coming clean about his past?