Everyone’s talking about Lindsay Lohan’s new Billy Joel tattoo, which quotes a line from his ’89 song Go to Extremes. According to the new ink, Lilo feels she’s “in the prime of her life,” so why is she tweeting Chris Brown?

After years of being in the public eye for her boozing, partying and legal dramas, Lindsay Lohan has a new tattoo and it seems to announce that she’s through with all that madness. “Clear as a crystal, sharp as a knife I feel like I’m in the prime of my life,” reads the quote from Billy Joel‘s Go to Extremes; but the full song is actually also an apology of sorts written to someone who puts up with those extremes. 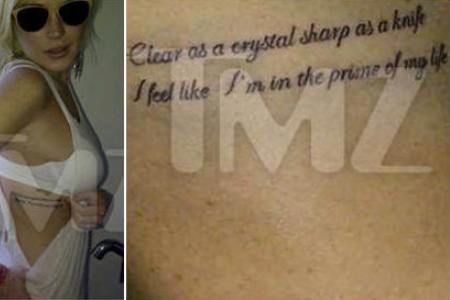 Call me a joker, call me a fool
Right at this moment I’m totally cool
Clear as a crystal, sharp as a knife
I feel like I’m in the prime of my life
Sometimes it feels like I’m going too fast
I don’t know how long this feeling will last
Maybe it’s only tonight

One reason could be the alcohol and drugs. The other possibility? Bipolar disorder. At any rate, SheKnows is glad to see Lohan embrace her struggle, while also shooting to be her best.

This isn’t Lohan’s first tattoo. The troubled starlet has the Marilyn Manson quote “Stars, all we ask for is the right to twinkle” on one wrist and “breathe” on her other; a heart on her hand; “shhh” on her index finger; and the phrase “la bella vita” on her lower back. She also wears the Manson quote, “I restore myself when I’m alone.”

While Lohan seems to be reaching for the clarity, she also recently reached out to Chris Brown, who hasn’t fared much better with the press since his infamous attack on Rihanna and more recent homophobic rants. Like Lilo, he continues to try to move forward after making a mess of things. Perhaps that’s why Lohan decided to reach out to him after his rocking VMA performance last weekend. 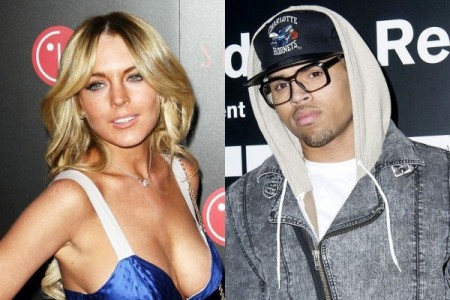 Jay-Z may not have clapped for Brown after his performance last weekend, but it turns out LiLo gave him some twitter love. First, Lohan tweeted that Brown “killed it.” Then, after he retweeted her raves, she followed that up with, “@chrisbrown wanna meet?”

Either Brown ignored her or the notorious duo took the conversation to a more private space. Either way, SheKnows can’t imagine this is a match made in heaven. Then again, perhaps these two can help each other find some less extreme ground.

Megan Fox removing Marilyn tattoo because she was “bipolar”

Justin Bieber and dad have Jesus on their side

Photos courtesy of TMZ and AceShowbiz