Ryan Reynolds is finally putting his good looks to use. The Canadian actor has joined Transformers star Rosie Huntington-Whiteley as the new face of Marks and Spencer’s latest campaign. 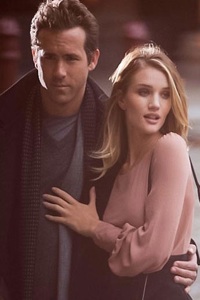 After dominating the summer with The Green Lantern and The Change-Up, Ryan Reynolds has plans for the fall too! The actor is one-half of the new fashion campaign for British retailer, Marks and Spencer.

Reynolds is joined by Rosie Huntington-Whiteley, who’s no stranger to striking a pose on a billboard. The dynamic duo appear together in several promo ads sporting the latest in fall fashion. They paint the perfect picture of a modern and stylish couple on the go.

According to EOnline, Reynolds is ecstatic about his new modeling gig. He says, “I was thrilled when M&S asked me to be in their campaign. I’m from Canada and grew up with the M&S brand. Going into an M&S store with my family or friends always gives me a beautiful pang of nostalgia.”

We have to give it to Marks and Spencer for pairing Reynolds and Huntington-Whiteley. Alone, they’re amazing but together they’re on fire!