Wearing a figure-hugging dress, Raven Symone was honored last night at the 2011 NAACP Theatre Awards by winning the Spirit Award. 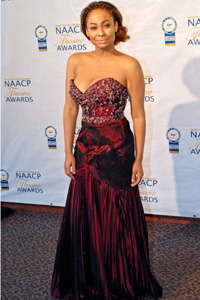 The actress is appearing in the ABC Family show, The Great State of Georgia, but also starred in the play Father’s Day with Rosie Perez and Andre Royo.

The Spirit Award is given out to those that “brings energy, tenacity, innovation, commitment, talent and spirit, to the theater scene.”

Symone was a child star, playing Olivia on The Cosby Show in the 1980’s before going on to star in her own Disney Channel series That’s So Raven.

The 25-year-old star has lost a lot of weight recently — and although she won’t reveal exactly how much she has lost, she told Wendy Williams that a more relaxed attitude has helped her lose weight.

“I stopped stressing. You have to realize at 15, there was a whole entire show I had on my shoulders. It was a very big cast and crew and if you’re sick for a day, people lose money and that’s a problem,” she said, revealing that focusing on small portion sizes has helped, too.