Following the vicious attacks on her son, Chaz Bono, mega-superstar Cher took to her Twitter account to defend her child. Chaz is one of the newest cast members of the 13th season of Dancing with the Stars, and ABC’s online boards have been flooded with comments about his casting. 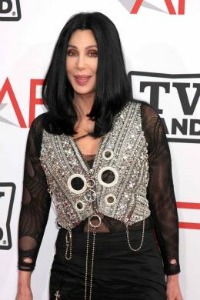 Always known as outspoken, iconic singer and actress Cher has kept quiet over the recent controversy surrounding the casting of her son, Chaz Bono, on Dancing with the Stars. That is, until now. And she has the full support of the producers of the show as well!

Throughout Chaz’ gender reassignment experience and subsequent publicity surrounding it, Cher has made several comments, but has not gone into details about her feelings surrounding other people’s perception of her child.

Chaz’ entry into the Dancing ring has stirred the pot at ABC, with many accusing the show of having a homosexual agenda. Chaz has kept mum on what has been happening, since he has been training hard with partner Lacey Schwimmer. But Cher has had enough, and took to her Twitter account to tell her side of the story and ask her followers to support her only child.

“I support him no matter what he chooses 2 do! God! Will there always be haters! It took COURAGE 2 do dwts! TG Chaz has an Unlimited Supply!” stated Cher in support of her only child.

Prior to Cher’s loving ferocious support of her son, DWTS Executive Producer Conrad Green explained to The Hollywood Reporter that there is no “agenda” at the show, as has been claimed by those rallying to keep Chaz off the reality series. They are just giving viewers a broad range of talent in the entertainment world. He too, stood by their decision to cast Chaz and supports him as he takes on this new challenge.

Said Green, “We don’t have an agenda of any sorts. I think of the 120 celebrities we’ve put on the show, we’ve had, I think now, three transgender or gay contestants. If that’s a homosxzual agenda, we’re not doing very well at it. What we try to do is reflect a broad range of the entertainment world in the casting of the show, and we’re always trying to find new things that people haven’t seen, new types of stories and that’s what we’ve been doing this season.”