The American Pie gang is back! Check out the official teaser trailer for American Reunion, coming in 2012. 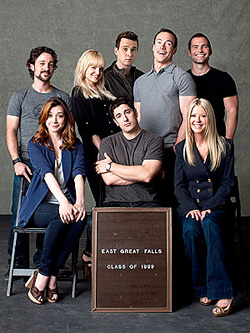 It’s hard to believe that it’s been 12 years since American Pie was released in theaters. What would our lives be like without such phrases as “this one time, at band camp”?

Luckily, the stars behind the original American Pie juggernaut are all back together for their high school reunion in the upcoming American Reunion. The film brings all of the original cast back into the fold — everyone from Jason Biggs to Mena Survari and Chris Klein.

Oh, and Eugene Levy is in this one too. Then again, he’s been in every single American Pie sequel. He really needs the work.

We have to wonder: what is it like to get together after all this time?

“In many respects we’ve grown up a lot,” Seann William Scott — aka Stifler — told People. “But on the other hand we haven’t grown up at all. On-set, Jason Biggs was farting up a storm, Chris Klein was belching, and Eddie Kaye Thomas and Biggs were hitting each other in [the groin].”

Good to see that none of the guys have really matured at all.

“In American Reunion, all the American Pie characters we met a little more than a decade ago are returning to East Great Falls for their high-school reunion. In one long-overdue weekend, they will discover what has changed, who hasn’t and that time and distance can’t break the bonds of friendship,” reads the official synopsis.

“It was summer 1999 when four small-town Michigan boys began a quest to lose their virginity. In the years that have passed, Jim and Michelle married while Kevin and Vicky said goodbye. Oz and Heather grew apart, but Finch still longs for Stifler’s mom. Now these lifelong friends have come home as adults to reminisce about — and get inspired by — the hormonal teens who launched a comedy legend.

We’re hoping that it’s just as classic and cringe worthy as the original. Sadly, we have a feeling it’s just going to make us twentysomethings who were in high school when American Pie came out just feel old.

Will you see American Reunion when it hits theaters in April 2012?