Venus Williams had to drop out of the U.S. Open, thanks to a debilitating illness. 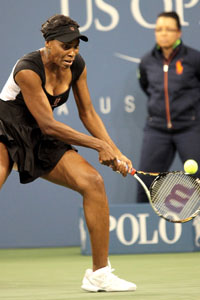 Venus Williams’ heralded return to the U.S. Open was short-lived: the superstar tennis player withdrew from the competition Wednesday. The 31-year-old champion revealed that she was diagnosed with Sjogren’s syndrome, a disease “that affects my energy level and causes fatigue and joint pain,” Williams said.

“I enjoyed playing my first match here and wish I could continue, but right now I am unable to,” Williams said in a statement. “I am thankful I finally have a diagnosis and am now focused on getting better and returning to the court soon.”

The American College of Rheumatology says that between 400,000 and 3.1 million people suffer from Siogren’s syndrome. Williams was set to play No. 22 seed Sabine Lisicki of Germany, but she forfeited the match with her withdrawal from the competition.

It sounds like that’s the wise choice, especially for her health. After all, it hasn’t been a healthy few years for either Venus or her twin sister, Serena Williams. Serena was rushed to the hospital in March with a pulmonary embolism.

“Thank you everyone for all of your prayers, concerns, and support. This has been extremely hard, scary and disappointing. I am doing better, I’m at home now and working with my doctors to keep everything under control,” Serena wrote to her fans after her hopital stay. “I know I will be ok, but am praying and hoping this will all be behind me soon. While I can’t make any promises now on my return, I hope to be back by early summer. That said, my main goal is to make sure I get there safely.”

We hope both can return to health and back into tennis soon. It’s where they belong.

Who do you want to win the U.S. Open?