Alyssa Milano and husband David Bugliari welcomed their first child on Wednesday. What did they name their future athlete? 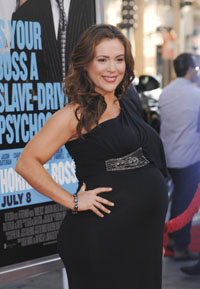 Former Who’s The Boss actress Alyssa Milano gave birth to a son Wednesday, named Milo Thomas. Baby Milo — the first child for Milano and her husband, David Bugliari — made his debut at 9:27 a.m and weighs 7 lbs., and measures 19 inches long.

It seemed like Milano was pregnant forever, though she only announced she was expecting a boy in March.

“As fun as it was reading all of your gender predictions on Twitter, I’m really bad at keeping secrets and had to share (not to mention, I was bound to unintentionally slip at some point),” the expectant actress, 38, wrote on her Web site in the spring.

“David and I are elated to announce that we are having a baby boy. We can’t wait to meet him. Boys names, anyone?”

We think Milo Thomas is a pretty good choice.

Milano was excited about the prospect of having a boy, especially with her love of baseball. Her baby shower was even baseball themed — it took place at a stadium during a game.

Plus, Milano and Bugliari knew he’d have a feisty personality, based on his constant action while still in the womb.

“Every time I get an ultrasound, he’s doing really funny things like sucking his thumb or elbowing me,” she told People earlier this summer.

Do you like the name Milo Thomas for Alyssa Milano’s baby?