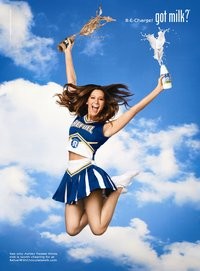 Ashely Tisdale may no longer be leading the pack on the CW‘s Hellcats, but that doesn’t mean she doesn’t have anything to cheer about. Check out her new “got milk?” campaign, in which she says cheerleaders can refuel with lowfat chocolate milk after a tough workout.

“Staying active and making the right food choices has helped me be strong and confident inside and out,” says Tisdale in a press release. “I am thrilled about my new Milk Mustache ad and want to cheer on squads across the country to also ‘Be Strong’ and refuel with chocolate milk after a tough practice.”

Those flips, stunts and pyramids can take a toll on muscles and bodies, so refueling and replenishing after strenuous exercise is key to helping you recover, according to the campaign.

Cheer squads can show how to “Be Strong” with low-fat chocolate milk by logging onto AmericanCheerleader.com/BeStrong and submitting a custom cheer video that includes a statement on how chocolate milk makes their team strong. Teens will vote and for every vote, $1 will go to Cheer for a Cure. The winning squad will receive $5,000 and be featured in a Milk Mustache ad in American Cheerleader magazine.

As for Tisdale, she’s looking to refuel her career after the cheer leading drama Hellcats was not renewed for the fall season. She’s still in the Hellcats spirit as she’s pictured in what seems to be a Hellcats-inspired cheer leading outfit for the “got milk?” campaign.

“For me, I’m looking at movies right now,” Tisdale told the gang at KTLA in Los Angeles on Tuesday. “I have to be inspired by something. If I can create what I exactly want in a movie, then I definitely have the opportunity to do that with my production company (Blondie Girl Productions).”

Tisdale is perhaps best known as Sharpay in the High School Musical series. A spokesman for the “got milk?” campaign was unavailable for further comment.

Photos courtesy of “got milk?” 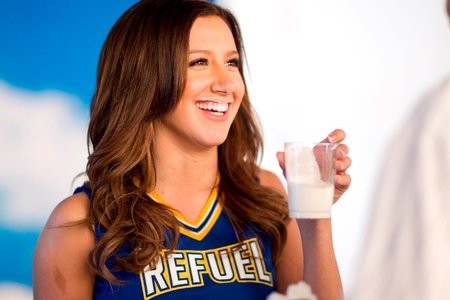