Whether she is nine months pregnant or at her son’s soccer game, Victoria Beckham is always dressed to the nines in sky-high platform heels. A recent back injury, however, has forced Posh to do the unthinkable — wear flats! 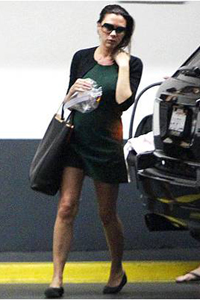 A back injury has forced Victoria Beckham to say so long to her stilettos! The new mom was spotted out for the first time since giving birth to her fourth child, daughter Harper Seven. In place of her normal platform heels, Posh was wearing a green dress paired with a black cardigan and black flats.

Posh has reportedly suffered a slipped disk and the back injury is making it difficult for her to care for her baby….and wear her beloved high heels! In fact, Victoria is reportedly at her “breaking point.”

She does have a lot on her petite plate! The new mom is busy caring for her baby daughter, Harper Seven, as well as her three other boys. In addition, she is trying to prepare her new line for New York Fashion Week and working hard to lose the baby weight by following the Five Hands Diet — athough it looks like she has already lost it all!

Beckham has worn heels while schlepping through the airport pregnant – so this back injury will undoubtedly put a damper on her style.

“Unless they’re on a ballet dancer doing ballet, I just don’t get it,” she once said of wearing flats. “The problem with skinny jeans is if you wear them with flat shoes, like flip-flops or trainers, you end up looking like a golf club.”

So does this mean she will be forced to wear flats to New York Fashion Week?

“She’ll have to see how she feels… Heels will put added pressure on the damaged area but it’s healing well, so it may not be an issue in another couple weeks,” a source reports.

Victoria took to twitter on Aug. 19th to thank fans for their support. “Thank u for your kind messages. I’m feeling much better and enjoying every precious minute with baby Harper, I’m so in love,” she tweeted.

A friend of Posh’s said her back injury has not only put a damper on her fashion, but her ability to take care of Harper.

“Victoria’s a wonderful mum, but she’s stressing out right now… She’s trying to be as hands-on as possible, but the lack of sleep…and her bad back are really putting her at a low ebb,” a friend said.