Chaz Bono is hogging up the allowance for transgendered contestants on the 2011 cast of Dancing with the Stars. This, according to the jealous pregnant man. 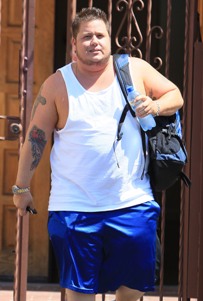 Chaz Bono may be the first transgendered contestant to waltz onto the cast of Dancing with the Stars, but does his casting mean another transgender man got shut out? Thomas Beatie, commonly known as ‘the pregnant man’ seems to think so.

Chaz Bono, pictured here at Tuesday’s Dancing with the Stars rehearsal in Los Angeles, has supposedly taken up the spot Thomas Beatie was hoping for — even though the pregnant man readily admits he never got so much as a callback.

Thomas Beatie, a female-to-male transgender who has given birth to three children, tells TMZ, “Chaz Bono stole my thunder.”

Thomas says he understands why producers wouldn’t cast two famous transgender people on the show — but he’s still pretty bummed out … telling us, “I wanted to try my new body out. I’m an athlete and I know I would have excelled.”

SheKnows has reached out to a Chaz Bono’s rep for comment, but has yet to hear what the 2011 DWTS cast member thinks of Thomas Beatie’s comments.

Do you think the pregnant man has a right to say Chaz Bono stole his thunder?