Welcome to the blogging world, Sinead O’Connor! It’s nice to have you trolling the Internet for a hook-up.

We shouldn’t be surprised Sinead O’Connor has no inhibitions about blogging her sexual desires, and yet — wow. The 44-year-old singer has opened up an Internet-wide campaign looking for sex and love in her very own blog. 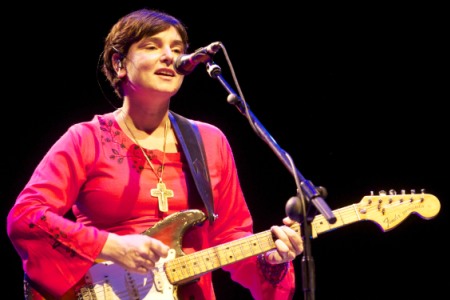 In a piece titled Is Sinead About To Hump Her Truck? Sinead O’Connor empathizes with a U.S. woman recently featured in a newspaper article for regularly being intimate with her truck. Sinead writes she’s so “desperate for sex” that, “I’m beginning to understand her head space.”

As far as the online hunt for a hook-up goes Sined O’Connor writes:

Thought would be fun to have little ‘so far’ re candidates for lurve.

Lots of very sweet men. Will definitely write back to all though it will take me a good few days!

Scarily, some were young enough to be my children.. Christ All-(expletive)-mighty. Guys.. seek help.

One TOTALLY hot sex (expletive) who made be [sic] bang into a huge pillar while walking through Copenhagen airport on way home from Estonia with descriptions of all the delicious things he wuz gonna do to me.. Sort of know him ish.. So safety wise it was perfect But.. Sadly then he said he’s married…. Still… He did say I would have fantastic  *** material for years, and he’s absolute-(expletive)-lutely right. Sigh.

So.. Next in consideration is a man who said he had spent time on Sunday morning looking up yams on the Internet. Now THAT is a caring man. A highly amusing e mail. Nicely eccentric. Will check him out for sure. He seemed like a kind and gentle soul.

Have had best e mails from cool women.. Saying they [are] in exactly the same  (expletive)-uation and advising me where I can mail order vibrators. Funnily, the majority of them were Irish journalists.

Anyway vibrators don’t smell good an feel all stubbly on yer face like guys do.

Lots of men and women saying thank God they aren’t the only ones with the desperate horn.

Four days later it looked like Sinead O’Connor had found a suitable match, only to later discover he has a pregnant girlfriend.

Best of luck to Sinead O’Connor on the love search.