Robert Downey Jr.’s got big baby news! The actor and wife Susan are expecting their first child together in 2012. 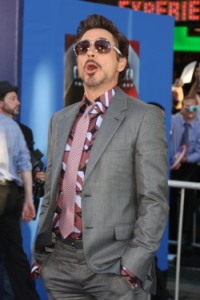 Surprised by Robert Downey Jr.’s baby news? You shouldn’t be. The 46-year-old actor predicted he’d be giving fatherhood another go-round in 2012!

Though he’s been busy dusting off his Iron Man costume as of late, it was during the promotion of Due Date that Robert Downey Jr. spoke openly about he and wife Susan’s baby plans. In 2010 he told reporters, “I think I will be wrist-deep in doo-doo within 18 months. I’m calling it right here.”

Time will only tell if the actor, who is already father to 17-year-old son Indio from his previous marriage, will get his pick of baby’s gender. Robert said at the time, “I think we should probably try to have a girl because I don’t want another male entity to have to compete. I don’t want Indio to feel there’s another boy in my life. But I don’t know what we’d have to do [to have a girl]. Do we have to put it in a spoon and hang it upside-down?”

Is it wrong that we’re now hoping Robert Downey Jr.’s baby is a boy? Yikes!

Confirming the pregnancy news to People a rep for the couple said Wednesday, “Robert and Susan could not be more excited over this news. They can’t wait to welcome this new baby into their wonderful family.”

Best wishes to Susan for an easy pregnancy, and kudos to Robert Downey Jr. on the accurate baby prediction!