Demi Moore, Jennifer Aniston and Alicia Keys are talking about love in Glamour magazine to promote their new movie Five.

Who knows more about love than women whose relationships are dissected by the public on a daily basis? Demi Moore, Jennifer Aniston and Alicia Keys all sat down with Glamour magazine to talk about what is important to them in in a man. 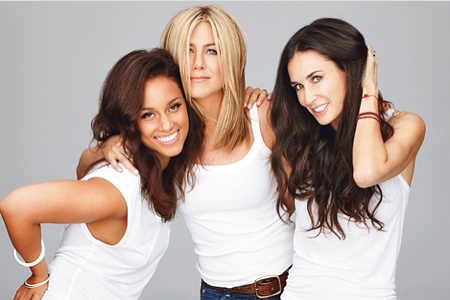 Demi Moore said she loves the details. “I get giddy when Ashton shows me another way of saying ‘I love you’ – any little thought or gesture that’s playful or sweet,” the actress said. “We leave Post-it notes for each other; some have been sticking up for five or six years! For me, it’s the small things.”

Alicia Keys, who has a nine-month-old son with producer Swizz Beatz, her husband of about a year, said their bond as a family is most important to her.

“We’re such a bonded happy family, and I hope that we’ll always be able to be that,” Keys said. “For me, the most important thing is that we always take the time to understand each other and grow together.”

Jennifer Aniston has been down a rocky road with love, going through a divorce with Brad Pitt and a series of less-than-successful relationships since. Currently dating Justin Theroux — who she is rumored to be moving in with — Aniston says she could never be in a relationship that was lacking “equality, generosity, integrity, spirit, kindness and humor. And awesomeness.”