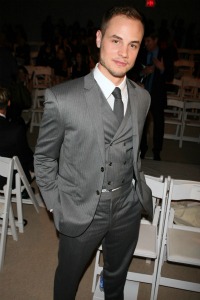 Like a country song, the heart of the cuckolded ex-husband of LeAnn Rimes has found love again — and wedding bells are ringing. Dean Sheremet has married photographer Sarah Silver just over a year after his divorce from the crooner was finalized.

Sheremet confirmed the news to Us Weekly, saying this love is the real thing — and heavily insinuating his love for his first wife in no way compared.

“Everyone says I’m getting a second chance at love, but I think I’m just doing it right for the first time,” he said.

Sheremet even posted a cute little video of the event on his Tumblr, showing him and Silver — who wore a red one-shouldered minidress for the nuptials — emerging from City Hall, where they exchanged vows in a civil ceremony.

LeAnn Rimes and Dean Sheremet split in 2009 after her affair with an also very married Eddie Cibrian was made public. Sheremet and Silver got engaged in November 2010. Rimes and Cibrian wed in April.