The second round of 12 semi-finalists hit the America’s Got Talent stage Tuesday night in hopes of making it to the top 10.

Remember that guy who took a dive from imaginable heights into a tiny pool? He was back on America’s Got Talent this week! 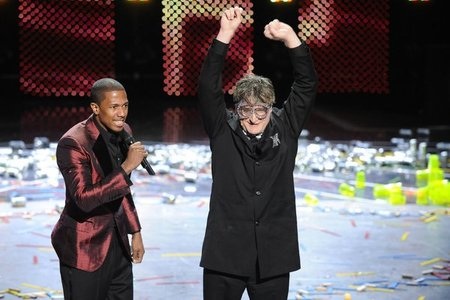 With five spots left, The America’s Got Talent stage turned into a battleground as the second set of semi-finalists fought for a place in the top ten.

The competition was so fierce, we had trouble deciding who to highlight — but don’t worry, we figured it out.

First up, the king of all things that fall one-by-one domino-style — The Kinetic King. He set off a chain reaction of candy, balloons and sticks so big, that even Howie Mandel needed goggles.

Talk about risking your life! Landon Swank took it to the next level with his illusion act. He put himself into a box above the stage and played a real life game of Russian Roulette.

Anna Graceman is a little girl with a big voice. Any child that tries to take on Motley Crue’s Home Sweet Home is either nuts or they’re that good. Anna was both. She admitted she takes on challenges and she is that good!

Watch her take on this huge Motley Crue song…

The Smage Bros. Riding Shows was a family affair this week. They brought everyone out to ride their motorcycles over, including their grandma.

Professor Splash could be the craziest man in the competition. This time, he attempted a 70 foot dive into a pool of flaming water!

You have to see this madman hit his mark…

You haven’t seen anything until you’ve seen the dancers of silhouettes make objects out of their bodies and shadows! It’s truly one of the most unique acts we’ve ever seen.

Don’t forget to tune in tomorrow when the last of the America’s Got Talent’s top ten spots will be decided.

Which act was your favorite this week?