America’s Got Talent’s Gymkana stepped up their acrobatic routine this week and they were on fire — literally.

The America’s Got Talent semi-finals continued Tuesday night and one act was on fire a bit more than the others, but for a different reason. 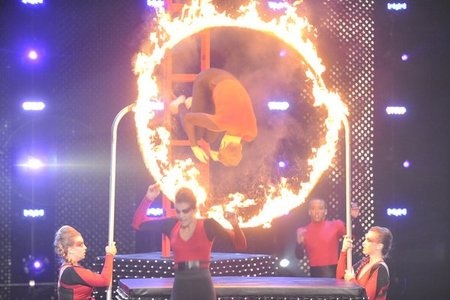 America’s Got Talent’s Gymkana is a stunning acrobatic group that definitely deserves to be on the stage, but after deciding to take the act to the next level in order to secure a spot in the top 10, it might not have been such a good idea.

Everything was going well until they brought out the ring of fire. One guy went to jump through the ring a short time after Piers Morgan buzzed the group and somehow he miscalculated the tumble. He knocked the ring of fire off of its pedestal, onto the stage and ultimately onto him.

We are happy to report that Nick Cannon returned to the stage after another act performed and a commercial break. He reported that the guy’s fire proof costume kept him from getting seriously injured.

This just goes to show people will do anything for their talent.

Check back tomorrow when the last five open spots of the top 10 are decided.

What did you think of Gymkana’s close call?